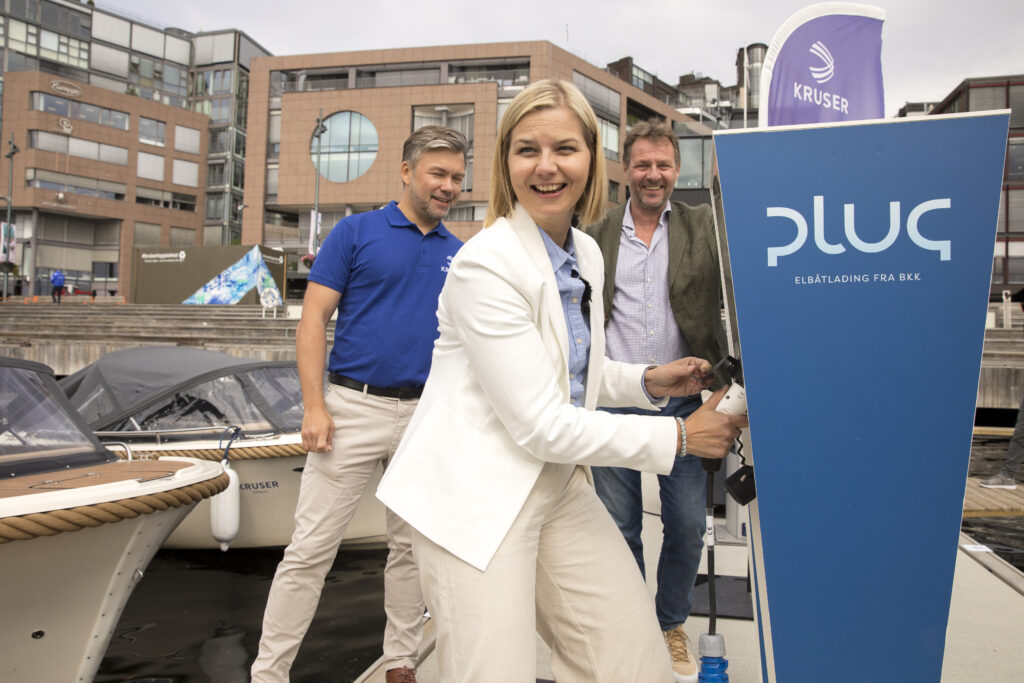 Norway's first fully electric harbour has opened at Aker Brygge in Oslo, Norway. You can both join an electric boat pool and fast charge your electric boat. The official opening was carried out by the Minister of Education and Integration Guri Melby.

It is great that people can enjoy the fjord in an even more environmentally friendly way. I would very much like to try electric boating, the minister said when she opened the fully electric harbour. - It is excellent that we have players such as BKK, Aker Brygge Marina and Kruser who invest and contribute to innovation like this, says Minister Guri Melby.

Use the boats 75 % more frequently than the private boat owners
Kruser AS, the world's first electric boat pool, has had great success with its boat sharing service, which was established in 2020. The memberships have quickly sold out. Last year it took 1.5 weeks, and this year, even with multiplied capacity, the full-time memberships in Oslo and Bærum were already sold out in April.

While most leisure boats are out at sea less than seven times during the summer months, Kruser's members were on a boat trip an average of 15 times last year. This year, and after a year of corona restrictions, the usage has increased by more than 25 percent compared to last year.

- Our figures show that with our concept, both the boats, the marinas and the infrastructure are utilized 22 times more compared to the privately owned leisure boats. In this way, access to the sea is democratized, the pressure on attractive coastal areas is reduced - and with zero-emission boats, both noise and pollution is decreased, says Christer Ervik, general manager of Kruser AS

Part of the national electric boat charging network
While the Kruser boats charge on 22 kW chargers from Plug, the infrastructure on Aker Brygge is also part of Northern Europe's first fast charger network. The BKK company Plug is now building electric boat chargers in several places along the Norwegian coast.

– We make it possible to berth, connect your boat to the fast charger and buy an ice cream while you wait. This is the second maritime fast charger that has been put into operation in Norway. We opened the first in Florø in May. These chargers are the first wave in what we hope will be an electric boat revolution. We have plans to put up more chargers but would like to hear where the boating people would like to see chargers, says Maria Bos, general manager of Plug.
BKK's ambition is to become the leading player within electrification in Norway.

- Fossil fuel must be replaced with renewable energy, especially within the transport sector. Kruser does a brilliant job of offering electric boats as a sharing service, but we do see that many argue that there has to be more chargers before they dare to buy their own electric boat. And we need marinas and landowners who provide access. That is why the Aker Brygge project is so important. This way we can demonstrate that it is possible, says Maria Bos.

Reduces noise and emissions
The electric boats reduce both CO2 emissions and noise. In addition, Kruser's boats are free of toxic antifouling, which saves the sea from emissions of biocides and microplastics. They also use environmentally friendly fenders from Norwegian Polyform.

For Aker Brygge Marina and landowner Norwegian Property, it is important to be at the forefront of sustainability development. - The electric boat harbour at Aker Brygge joins a series of sustainability measures carried out by Norwegian Property making the marina greener, and the sea and air cleaner. If we are to reduce emissions, we need to step up and show that with simple measures you can contribute to reduction. For us, it is a matter of course to facilitate a more environmentally friendly boating life and we are proud of the collaboration with BKK and Kruser. We are now looking forward to following the further development of electric boats, says property manager in Norwegian Property (NPRO) and general manager of Aker Brygge Marina, Geir Olav Heggeroll.

Could contribute to new jobs
Norway has the best conditions for tackling the green shift at sea, says leader of the Electric Boating Association, Birgit Liodden. - We are world leader in electric cars. We are a proud maritime nation. We have a boat building industry, and we have the highest number of leisure boats per capita in the world. Everything is in place for Norway to have a leading position internationally in the green shift at sea. This can mean new jobs and export opportunities, says Liodden.